From Terraria Wiki
Jump to navigation Jump to search
Fallen Star
Statistics
Sounds
For the blue stars that give the player mana when collected, see Star.

Fallen Stars are items that randomly fall from the sky at night and disappear at dawn (4:30 AM). They can be used to craft Mana Crystals, which permanently increase a player's mana capacity by 20 points each. They are also used in a variety of crafting recipes, and as ammunition for the Star Cannon and Super Star Shooter. Hence, Fallen Stars can be stored in ammo slots.

Fallen Stars emit light while on the ground, making them easy to spot at night. They cannot be placed by the player as permanent light sources, but can be combined with a Bottle to craft the Star in a Bottle. They will disappear if dropped by a player during the day, but can remain in a player's inventory or a storage object (such as a chest) indefinitely.

Although uncommon, Fallen Stars can hit enemies and bosses for up to 2,500 damage. They cannot damage players. 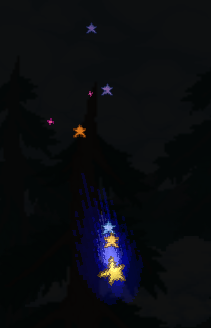 A star falling from the sky