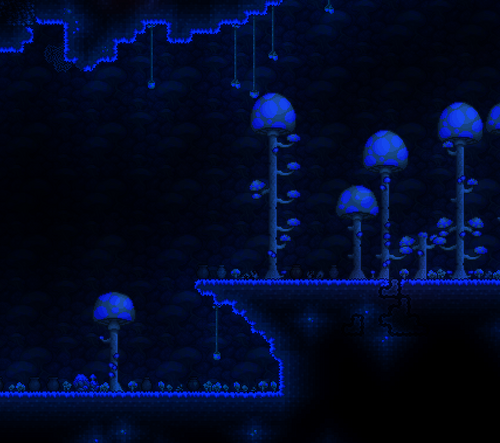 Mobile version, Underground Glowing Mushroom biomes are large, layered caverns which feature Mushroom Vines hanging from the ceiling and surface-style Giant Glowing Mushrooms. They generate with set features, including a span of flat ground (for Giant Glowing Mushrooms to grow on), or possibly a wide lake for fishing purposes. These long spans of flat ground are conducive to the spawning of Gold Chests, statues, and other objects which generate underground but rely on having a certain amount of level terrain like Life Crystals, making these biomes attractive when hunting for such things.

The Truffle Worm, a critter used to summon Duke Fishron, can only spawn in an underground Glowing Mushroom biome.

Characters
Pre-Hardmode:
During Hardmode:
Critters:
Unique Drops
From Spore Bat:
From terrain:
From Mushroom Chests:
From Angler Quests:
For Sale
From Dryad:
From Truffle:
Any Happy NPC Shop:
Music 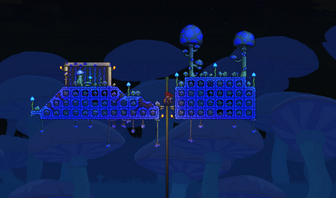 An example of a compact, "efficiently made" Surface Glowing Mushroom biome. The Truffle can be seen located in his own house.

This content is transcluded from Biome backgrounds § Glowing Mushroom biome.

Glowing Mushroom backgrounds are combined with the current forest background.

V • D • E
Surface Layers
Underground Layers
Mini-Biomes
Structures and Other Biomes
Retrieved from "https://terraria.wiki.gg/index.php?title=Glowing_Mushroom_biome&oldid=864050"
Categories:
Hidden categories:
Cookies help us deliver our services. By using our services, you agree to our use of cookies.