Desktop-Only Content: This information applies only to the Desktop version of Terraria. 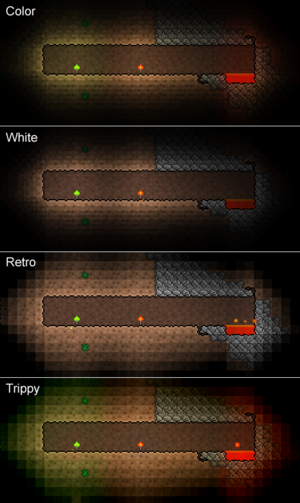 The four different lighting modes. The green light in the colored modes is caused by the Cursed Torch placed on the left.

The lighting mode determines the way light from all sources renders in the World. It is set from Terraria's settings menu, in the "video" sub-menu. There are four different lighting modes available, which can also be cycled during gameplay by pressing ⇧ Shift+F9 key.

The lighting mode also dictates whether the game will utilize certain performance-intensive visual effects, like the smoothing of liquid flow, along with the following shader effects (most of which were introduced in 1.3):

The effects above will only be applied in the Color or White lighting modes, and are deactivated in the Retro and Trippy modes.

The chosen lighting mode will have an effect on the performance of some computers. Refer to the table below for each mode's performance requirements (lower means better performance on worse computers).

Color mode is the default. It determines light levels using pixel clusters that are smaller than tiles, which means that light transitions more smoothly. White mode does the same, but all light is white, regardless of the color of the source.

Retro mode renders light levels per-tile, producing a more "blocky" or "pixelated" look, and also renders all light as white-colored. This mode reproduces Terraria's look from before its 1.1 update. Trippy mode does the same, however, allows colored light, whose colors are similarly determined per-tile.