There are currently 3 types of liquids: water, lava, and honey. While each has varying properties, all of these liquids share common "liquid mechanics" that describe how they move and interact with their surroundings. For example, all liquids flow to fill the area they occupy, and they can all be moved with certain items. Liquid can be dangerous because the player will fall into them and if the liquid is deep, they will drown. However, all liquids are useful to some extent because they can be used in crafting, and this is one of the main distinctive feature between the types of liquids. 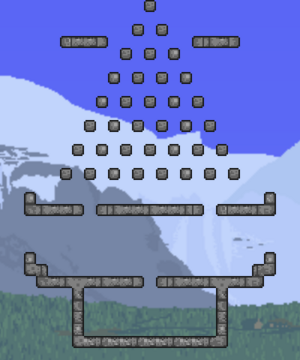 Liquids can fill part or all of a tile, and can flow between tiles. Liquid in motion is considered "flowing", and can visually occupy more of a tile than it will when it comes to rest. Liquids that are not moving are considered "settled": at each game startup, all flowing liquids are explicitly settled, moving them to their natural destination.

Water flows most quickly, lava is slower, and honey flows the slowest. If a liquid block is placed with open space beneath it, it will flow downwards. If it has a block below it, but open space to either side, it will flow to either or both open sides, resulting in partial tiles of liquid. However, there is a minimum depth for liquid tiles; if the liquid spreads too thinly, it will disappear altogether.

Buckets and pumps can be used to collect, move and place liquid around.

When using a bucket on liquid, the game checks a 3x3 square around that tile for more liquid of the same type. If it finds at least half a tile of liquid in that area, the bucket collects what is there, up to a full tile at a time. Regardless of if it collected less than a full tile, the bucket is always filled completely and is able to pour out a full tile. Full buckets can be stacked up to 99, and placed in inventories, chests, etc. like any other item.

Pumps are mechanisms, used with wires and various triggers. When an Inlet and an Outlet Pump are connected with wire and triggered together, they will transfer up to four tiles of liquid from inlet to outlet. They cannot duplicate liquids, but they can be used to keep a liquid continuously flowing. For moving large quantities of liquids, pumps can be set up once and left to finish the job. (This also applies to filling large areas.) However, the setup can be finicky, it requires a timer, and using a stack of 99 buckets may in fact be more efficient.

Before version 1.4, flowing liquids would tend to increase in volume. They could be purposely poured over blocks to split their flows, maximizing the volume increase, and/or pumps could be used to keep them flowing (and increasing) indefinitely. See below for more details.

In-game graphic of a waterfall. Notice the half block.

Liquids cannot be placed in a tile containing a block, even if the block has been hammered into a partial block. If a liquid tile is adjacent to the empty part of a partial block, it can appear to fill the space, but is not considered "in" the block's tile, and cannot be picked up from there. Blocks can be placed in liquid (except lava). Any liquid in the tile will be trapped, and cannot flow out (or otherwise be interacted with) until the block is removed. However, such trapped liquid can "fall" out of the block during the next game startup, as part of the "settling liquids" phase. As liquids flow, their volume tends to increase. This can be exploited to duplicate liquids indefinitely (see Infinite Liquids below).

If a full tile of liquid is next to a half block with open space on the other side, it will visually flow over the block and continue as a river or waterfall (including lava or honey). This waterfall is purely a visual effect, and cannot be interacted with (a "lavafall" of this sort will not burn the player, nor a "honeyfall" heal them). If the liquid is water and the half-block is a Gemspark Block or Rainbow Brick, the waterfall will glow with the color(s) of the half-block.

At various points in the world, liquids can be found dripping from ceilings. This dripping effect is purely visual, and has no functional use. This effect can be created by the player using Magic Droppers. Natural or player-made "droplets" can be broken (but not harvested) with a pickaxe or drill, aiming just below the block they drip from.

Liquids can be stored temporarily within Bubbles, which are otherwise furniture-like, but displace liquids as if they were blocks. Upon restarting the world, the liquid will be freed, allowing it to fall (it is wise to remove lava from bubbles before exiting the world). Bubbles can also be used to support liquids in midair (again, as if they were blocks), and these will not fall when the world is restarted.

Players normally cannot walk over liquids, and will instead fall in. Falling into liquid negates all fall damage regardless of distance and depth of the liquid pool. Players entering/exiting liquids will make a splashing sound and appropriate animation. Certain items can allow walking on liquids (see below); the player still will not take fall damage when landing on the liquid. While in liquids, players will find their movement slowed. The slowing effect matches the liquid's flow speed: Water is least restrictive, lava is in-between, and honey is most restrictive.

Players have no natural ability to swim in liquids, but can still jump or fly according to their current equipment. Certain items can cancel the movement penalty (only for water) and/or allow free swimming, see below for details. The Flipper (or its upgrades) will allow the player to swim freely in any direction. However, it does not allow them to float, and as soon as they stop moving they will sink down through the liquid. The Inner Tube causes players to float to the surface. The Neptune's Shell and its upgrades will allow the player to swim freely in water or honey, but not lava. Note that neither landing in nor jumping out of liquid (including swimming up past the surface), will reset flight time for wings or Rocket Boots variants.

There are a few different ways to remove liquids:

When different liquids touch each other, they create one of the three contact-created blocks: Obsidian (water+lava), Honey Block (water+honey) and Crispy Honey Block (honey+lava). When this happens, up to a tile's worth of each liquid will be consumed, but either or both of the touching tiles can be partial and/or flowing tiles – that is, creating the block does not require a "full" tile of either liquid.

Furthermore, liquid tiles are minor crafting stations, which enable a few recipes whenever the player is nearby. Their recipes do not use up the liquid, even when filling Bottles with water or honey.

All liquids can be fished in. For each liquid, the pool must contain a minimum number of tiles for fishing to work (see the Fishing page for full details). Lava requires a special fishing pole to fish in it, the Hotline Fishing Hook. In the

Mobile version, the Lavaproof Fishing Hook accessory or Underworld bait can be used to fish in lava with any fishing rod. Lava and honey have a very limited selection of fish that can be caught in them.

Water is by far the most common liquid in the game, appearing in lakes from the edge of space to the depths of the caverns. (Lower in the caverns, lava takes over as the primary liquid, but some water still appears.) However, if water enters or is placed in the Underworld, it will rapidly evaporate.

Lava is the second most common liquid in the game. It appears often in the lower cavern layer, and is plentiful in The Underworld. It can also be created in two ways:

Lava has two unique properties: it deals damage, and it dislodges and destroys items. Lava will deal direct damage to the player on contact, and inflict the On Fire! debuff. However, the player cannot drown in lava. The Obsidian Skin Potion or Lava Charm/Lava Waders will prevent contact damage for their duration, and an Obsidian Rose will sharply reduce the damage. Lava's contact damage is reduced by a player's defense, so advanced armor can be helpful. Lava will also burn most enemies, and so can be used in traps.

Honey is the rarest liquid in the game, and is naturally found only in and around Bee Hive mini-biomes inside the Underground Jungle. It can be created by mining Hive Blocks, but if honey is produced, the Hive Block will not drop. Honey will slow the player's movement a great deal (as will the Honey Blocks often found nearby). 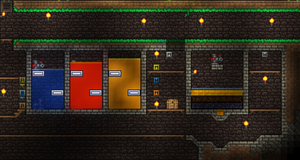 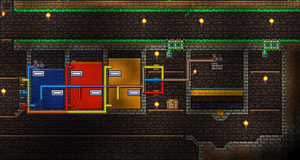 Using pumps, a player can construct infinite liquid sources, by pumping liquid in a continuous cycle.

To the right are two examples of compact infinite liquid factories, with arrangements to produce the contact blocks as well. Note the enclosed storage to prevent overflowing and the 1 Second Timers to automate the process. The first uses a common mixing chamber that can draw fluid from the generation chambers, four tiles per switch-press. The second takes an alternative approach to have blocks continuously available.

The second option's double Outlet Pumps do not (as formerly thought) duplicate the liquid from the input. However, they may still help speed, by carrying overflow liquid when the first Outlet Pump is blocked (that is, the liquid it brought in last cycle has not had time to flow away).

The above form of liquid generation will not work well on these versions, and may destroy liquid instead of creating it. There are, however, the following alternatives:

A slow but easy method to achieve infinite liquid involves a U-shaped structure which consists of 5 blocks, and one Bucket. Pouring liquids on either top of the U-shaped structure will split it in two halves, with one half flowing downwards and the other half staying inside the structure and able to be collected and placed again. This method is best used on water duplication, as the player can simply hold ⚒ Use / Attack to duplicate it. Lava and honey move more slowly, resulting in less efficiency. Using Smart Cursor can help to collect the liquids.