In Terraria, enemies, critters, and other NPCs will spawn off-screen and enter the screen area based on their AI. The rate at which enemies are spawned, the maximum number of enemies, and the type of enemies spawned are all dependent on the time of day, biome, the tile type of the ground, and other factors.

The game determines new enemy spawns every tick.[1] There are two variables it takes into consideration when doing so: spawn rate and max spawns, with the spawn rate setting the chance of an enemy spawning at each tick, and the max spawns limiting the number of enemies that are active at a time.[2]

The default max spawns is 5.[4] This means that a new enemy can only be spawned if the sum of the NPC slots of all current active enemies is lower than 5. Most enemies occupy 1 NPC slot by default; see the following table for a list of all enemies with a higher or lower number of NPC slots. Active enemies exclude many enemies considered part of the same enemy, for example, body and tail parts of worms, because a Giant Worm, which has 6–8 segments (i.e. individual enemies), would otherwise occupy a disproportionate number of NPC slots. Town NPCs are not considered active NPCs for the purposes of NPC spawning. See the following table for a list of enemies that are not considered active.

Spawn rate and max spawns have set values, which are different depending on the environment. They are formally defined for the environments mentioned in the following tables. Events that are not listed usually employ separate mechanisms to control spawn rates; bosses usually occupy enough NPC slots to block most other spawns.

Additionally, the spawn rate will be modified by the number of active enemies in the area. The fewer active enemies there are, the faster new ones will spawn:

(Note that all products are rounded down to the nearest integer.)

The following table lists some examples for this mechanic. It is to be read in the following way: If the natural spawn rate and max spawns (as determined from the overview above) and sum of the NPC slots of all active enemies are equal to the values in the first three columns, then the spawn rate is altered as shown in the last column.

Certain items can be used to change the spawn rate and max spawns when used or placed, as per the following table. All effects are multiplicative rather than additive.

These effects do not stack with themselves, i.e., a single Water Candle, Peace Candle, or Sunflower has the same effect as multiple of each one.

Water and Peace Candles cancel each other out, even though they do not alter spawn rates by the same absolute values. If both are active (e.g. a Peace Candle is held while a Water Candle is placed nearby), none is applied.

In addition, nearby Fairies have the same effect as Sunflowers and Invisibility Potions, reducing the effective spawn rate by 17% and decreasing the max spawns by 20%.

The presence of nearby town NPCs generally reduces spawn rates and max spawns. This effect is adjusted in the Underworld and in Graveyards.

When 3 or more town NPCs or the Skeleton Merchant are present nearby, no enemies will spawn. This is only valid for areas outside of the Underworld and Graveyards, and only for Classic worlds – in Expert Mode, there is still a 3.33*1/30 (3.33%) chance an enemy may spawn that tick. Enemies from events as well as bosses (and their servants) will bypass this restriction.

Spawn rates can be manually altered in Journey Mode, from 0× (disabling spawns) to 10× the normal rate. Even with the spawn rate set to 0×, bosses may still be summoned, mining up Tombstones can still cause Ghosts to spawn, and certain Celestial enemies can spawn.

Each player in the game will spawn their own enemies. If two players are in the same area, monsters will appear twice as fast as they would with only one player. Max Spawns rule are still used, which means that even if 2 players are in the same spot, you cannot gather 30 normal monsters near the spot. (Don't forget, the bats count as 1/2, and some special enemies count as 2 or more.)

Choosing a spot to spawn the enemy 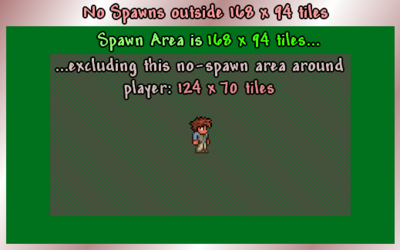 Verify When the game decides to spawn an enemy, it will first choose a random tile within a rectangle around the player (specifically, the tile containing the top left corner of the player's hitbox). The maximum distance from the player it can choose from is 84 tiles east, 83 west, 46 up, and 45 down. If the picked tile is a solid block, it will try another one. Tiles that are actuated out do not count as solid. If the picked tile has a player-placed wall that blocks enemies from spawning, it will also try another tile.

Once an empty tile is found, it moves down until it finds the ground. (Note that this tile can be more than 45 tiles below from the player. If it finally is outside the "Active Rectangle" it will be instantly despawned, anyway.) If there is enough space for an enemy to be spawned at this location, this will be the tile it chooses. The exception to this is when the player is in an area where Harpies and many other flying enemies can be spawned. In this case, the game does not attempt to find a ground tile.

The chosen tile is then checked to make sure it is not within the "safe" area around the player. It cannot be within 62 tiles east or west, or 34 tiles up or down. Also, the chosen tile space must be completely outside 2088 × 1172 pixel rectangles centered on the center of each player's hitbox. (If the player is not riding a mount, the top edge of this is 34 + 3/16 tiles above the top left corner tile mentioned above, meaning that NPCs can spawn on ground exactly 35 tiles above a player standing on half blocks, but not a player standing on full blocks.)

Using certain items causes monsters to spawn further out than normal. Equipping a Rifle Scope or Sniper Scope does so only when the player has a compatible gun selected, whether or not the player is zoomed out.

Note: If using the Depth Meter, Compass, or similar, each tile is equal to 2 feet, so double all measurements to get distances in feet

Choosing a type of enemy to spawn

The type of enemy spawned will depend on many factors including, but not limited to:

V • D • E
Combat
Environment
Interface
Items
Game
Multiplayer
Player
Retrieved from "https://terraria.wiki.gg/wiki/NPC_spawning?oldid=841143"
Categories:
Hidden categories:
Cookies help us deliver our services. By using our services, you agree to our use of cookies.