A pyramid, the top sticking out of the sand in a desert.

Two pyramids that spawned close to each other in one world.

A Pyramid is a Desert structure composed of Sandstone Bricks. Pyramids are rare, and most generated worlds will not contain any.

The bulk of the Pyramid is buried underground, with its tip sometimes protruding slightly from the Desert surface. Pyramids contain a single zigzagging tunnel leading to a treasure room, which can contain unique loot. In addition to unique treasures, they are furnished with unique decorative banners and a variety of Pots and Coin Stashes. 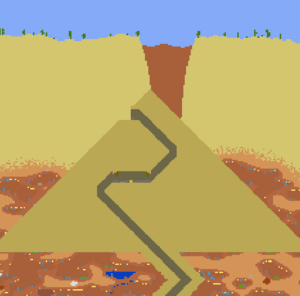 Rarely, pyramids will spawn in the underground desert. 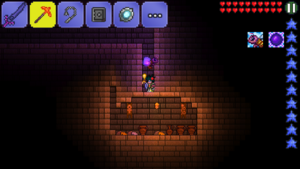 A second room in a pyramid found in the pre-1.3

version
V • D • E
Surface Layers
Underground Layers
Mini-Biomes
Structures and Other Biomes
Retrieved from "https://terraria.wiki.gg/wiki/Pyramid?oldid=798121"
Categories:
Hidden categories:
Cookies help us deliver our services. By using our services, you agree to our use of cookies.