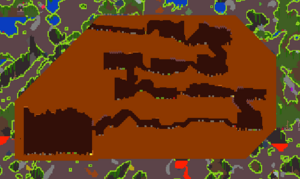 Map view of a Jungle Temple. The entrance to this one is at the top-left, though it is sometimes at the top-right (it is always near a top corner).
Not to be confused with Jungle Shrine.

The Jungle Temple (also known as the Lihzahrd Temple) is an enclosed structure constructed of Lihzahrd Bricks and located in the Underground Jungle. It is always present in any generated world, but can only be properly entered after Plantera has been defeated. The Jungle Temple contains unique Lihzahrd-themed enemies, traps, and furniture. The Lihzahrd Furnace, a crafting station for further Lihzahrd-themed furniture, can be found in its Chests. The Lihzahrd Altar found in the Temple's final chamber is used to summon the Golem boss. Defeating Golem triggers the spawning of Cultists, used to summon the Lunar Events.

The Temple is entered via the Lihzahrd Door located at one of its two top corners. The door is initially locked, requiring a Temple Key to open, which is dropped by Plantera. Unlocking the door consumes one Temple Key from the player's inventory, and the door remains permanently unlocked for all players in the world. It is generally impossible to enter the Temple via any other conventional means since Lihzahrd Bricks can only be mined with at least the Picksaw dropped by Golem, and Lihzahrd Brick Walls impose numerous restrictions, e.g. on Teleporter use. There are, however, several methods to enter the temple prior to defeating Plantera.

The entire Temple is filled with several types of traps, including Flame, Spear, Spiked Ball, and Super Dart Traps. Traps occur much more frequently in the Temple than in the Dungeon and are far more damaging. They are activated by Lihzahrd Pressure Plates, which only respond to players (enemies walk on them freely without triggering them). As in the Dungeon, all Temple traps, pressure plates, and wires can be looted by the player for use in player-built mechanisms.

version
V • D • E
Surface Layers
Underground Layers
Mini-Biomes
Structures and Other Biomes
Retrieved from "https://terraria.wiki.gg/index.php?title=Jungle_Temple&oldid=862222"
Categories:
Hidden categories:
Cookies help us deliver our services. By using our services, you agree to our use of cookies.