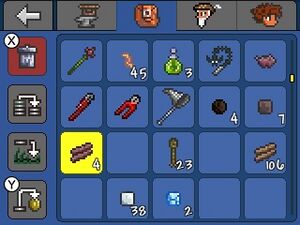 Inventory interface in the 3DS version

The 3DS version of Terraria was published by 505 Games and developed by Codeglue. It is a port of CodeGlue's

The 3DS version is unlike the other console versions, not only because of its exclusive entities, but also because it follows its own update line. A list of all the updates it has had, as well as a few highlights of each one, can be found at 3DS version history.

It can be played on the New Nintendo 3DS family of systems with a higher frame rate, an expanded world option, and the ability to move the camera around using the C Stick, similar to the effect of Binoculars.

The 3DS version's most recent update is equal to

Some of the following content is also available on the

Old-gen console version. Most of it used to be available in the

Mobile version as well, but was entirely removed with the 1.3 update.

version of Terraria is largely equivalent to

Other
V • D • E
Pre-Hardmode
Hardmode
Bosses
Retrieved from "https://terraria.wiki.gg/index.php?title=3DS_version&oldid=865372"
Category:
Hidden categories:
Cookies help us deliver our services. By using our services, you agree to our use of cookies.