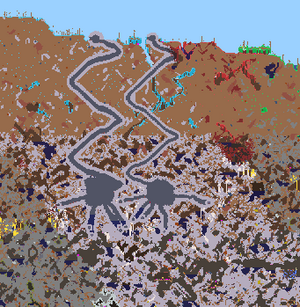 Once you enter hallowed land, you will see a rainbow in the sky. I can help you with painting that if you want.

The Hallow is a Hardmode surface biome. It is characterized by pastel-colored fairytale graphics, with cyan-colored grass, multicolored trees, and a large rainbow in the background, as well as similarly whimsical-looking (though dangerous) enemies. The Underground Hallow biome can be found directly beneath a naturally-generated Hallow biome.

The Hallow does not exist in newly-generated worlds. When the Wall of Flesh is defeated for the first time and the world converts to Hardmode, a diagonal stripe of Hallow biome extending from the surface to the bottom of the world will be generated, converting all applicable tiles to their Hallowed variant. This initial conversion can replace preexisting sections of the world's "evil biome" (Corruption or Crimson). If areas of Jungle or Glowing Mushroom biome are included in the conversion area, Stone will be converted, but grass on Mud Blocks will be unaffected.

Once generated, Hallow spreads in a manner similar to the evil biomes; Pearlstone, Pearlsand, and dirt blocks growing Hallowed grass will spread Hallow to neighboring blocks, causing Hallow enemies to spawn over ever-larger areas. Hallow can also be seeded in new areas via Hallowed Seeds, Holy Water, or Blue Solution. See below or the Biome spread page for more details.

The Hallow, unlike Crimson and Corruption, cannot spread through mud areas such as found in Jungles or Glowing Mushroom biomes.

The Dryad can tell the player the percentage of Hallow and Corruption/Crimson in the world.

See Underground Hallow for the content found during Hardmode in and under the Cavern layer.
Characters
Common:
During Rain:
At night:
Hallowed Desert:
Critters:
Bosses:
Unique Drops
From any enemy:
From Light Mummies and Spectral Mummies:
From Pixies:
From Unicorns:
From Gastropods:
From Gastropods and Spectral Gastropods:
From Rainbow Slimes:
From Queen Slime:
From Empress of Light:
From vegetation:
From terrain:
From Fishing:
From Angler Quests:
From shaking trees:
For Sale
From Painter:
From Steampunker:
Music

The Hallow spreads itself, similar to the evil biomes. This means that it slowly converts certain susceptible tiles that are in the vicinity of existing Hallowed blocks. Defeating Plantera for the first time reduces the speed of the Hallow's spread by 50*1/2 (50%). Hallow can convert Crimson and Corruption into grass blocks, but otherwise cannot convert blocks already claimed by an evil biome. This can result in areas where the Hallow and an evil biome intertwine closely. If Hallow is introduced into a pre-Hardmode world, its spread will be very limited, similarly to the evil biomes.

When the Hallow spreads through desert, it becomes Hallowed Desert. It is very similar to the Hallow: the music theme is the same, the enemies are the same (except for the Light Mummy and Crystal Thresher), and the background is slightly different.

The sand is replaced by pearlsand. Although their color is different, Cacti still drop Cactus when cut, and Waterleaf plants are also able to grow.

Hallowed Be Thy Name • “Your World is Hallowed”
Have 50% of your world Hallowed.

This content is transcluded from Biome backgrounds § The Hallow.

Every Hallow background has a rainbow in it.

V • D • E
Surface Layers
Underground Layers
Mini-Biomes
Structures and Other Biomes
Retrieved from "https://terraria.wiki.gg/index.php?title=The_Hallow&oldid=863988"
Categories:
Hidden categories:
Cookies help us deliver our services. By using our services, you agree to our use of cookies.