Thorny bushes growing in the grass.
For the underground Hardmode variant of this biome, see Underground Crimson.
"Making the world bloody"

The Crimson is an evil biome with a fleshy infection, red gore theme, in contrast to the dark purple wasteland theme of its counterpart, the Corruption. Every world will contain one of the two generated randomly except for special seeds (each with a 50% chance of occurring) or chosen by the player upon world creation. Both contain similar hazards and feature their own unique enemies, items, and blocks. The tools, weapons, and armor obtained via Crimson material generally have minor advantages over those obtained via Corruption materials; however, Corruption tools are slightly faster. Crimson enemies tend to have slightly higher stats, such as health, defense, and damage.

The Crimson surface contains red Crimson grass, Crimson Trees, and Vicious Mushrooms. Red thorny bushes grow on the grass and will damage the player when touched. Water in the Crimson is also red. The Crimson also contains multiple chasms, extensions of the biome into the underground. Every chasm has an entrance on the surface and leads to a large, circular cavity, then branches off into small "fingers" which end with a Crimson Heart. Crimson Altars generally line the chasm's passages, appearing inside and around it. Chasms consist of Crimstone, which can be blown up by explosives, mined with a Nightmare/Deathbringer Pickaxe or higher, or purified to Stone by using Purification Powder.

The Crimson spreads, meaning it slowly converts adjacent tiles to their Crimson variants. See below for details. Chasms, Crimson Altars, and Crimson Hearts will only appear upon world generation, and will not spawn in a Crimson area that has formed through spreading. If enough Crimson manages to take over a new area, then that area will eventually adopt the Crimson's theme music, background, and water color. For an area to be considered a Crimson biome, at least  300 / 200 tiles of Crimson grass or Crimson blocks must be present.

See Underground Crimson for the content found during Hardmode in and under the Cavern layer.
Characters
Pre-Hardmode:
Hardmode:
Crimson Desert:
Unique Treasures
From Crimson Hearts:
Unique Drops
From Blood Crawlers, Crimera, and Face Monsters:
From Blood Crawlers, Crimera, Face Monsters, Blood Feeders, Blood Jelly, Herplings, and Crimslimes:
From Crimera:
From Brain of Cthulhu:
From any enemy in Hardmode:
From Herplings and Crimslimes:
From Blood/Dark Mummies:
From vegetation:
From terrain:
From fishing:
From Angler Quests:
From shaking trees:
For Sale
From Painter:
Music

The Crimson spreads itself, similar to the Corruption and the Hallow. This means that it slowly converts certain susceptible tiles that are in the vicinity of existing Crimson blocks. While its spreading capabilities are very limited during pre-Hardmode, it spreads much faster and more aggressively after defeating the Wall of Flesh. Defeating Plantera for the first time reduces the speed of the Crimson's spread by 50*1/2 (50%).

In Hardmode, Crimson spreads through Deserts, transforming them into Crimson Deserts. A Crimson Desert is fairly similar to a regular Crimson biome: The theme music and enemies are the same, with the addition of:

Sand is replaced by Crimsand. Cacti drop ordinary cactus when cut, even though they have a different color. Waterleaf is not able to grow in Crimson Deserts. If a Crimson biome overlaps a Desert biome during world generation, Sand will be converted to Crimsand, but it will not spread until Hardmode. 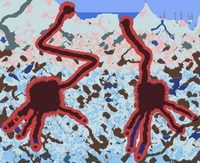 Like the Crimson desert, Crimson Snow biomes are created when Crimson spreads into a Snow biome during Hardmode. Snow Block is not convertible, but Ice Block can be converted into Red Ice Block. Red Ice can be created during generation if a Crimson biome overlaps a Snow biome, but it will not spread until Hardmode. 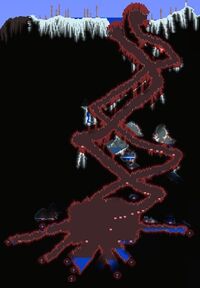 Two Crimson chasms overlapping each other.

This content is transcluded from Biome backgrounds § The Crimson.

version
V • D • E
Surface Layers
Underground Layers
Mini-Biomes
Structures and Other Biomes
Retrieved from "https://terraria.wiki.gg/index.php?title=The_Crimson&oldid=864059"
Categories:
Hidden categories:
Cookies help us deliver our services. By using our services, you agree to our use of cookies.