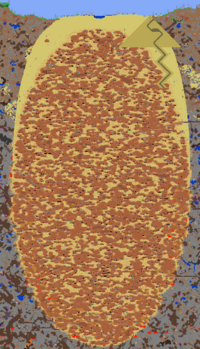 A world view of an Underground Desert generated in 1.4.0.1 with a Pyramid and an Oasis.

The structure of the Underground Desert resembles that of a real-world ant hive, featuring numerous small caves mainly composed of Sandstone Blocks and Hardened Sand Blocks, which are connected in varying degrees. It is very large when fully explored, rivaling even the Dungeon in size, and is always either circular or oval in shape. The Underground Desert is inhabited by many types of Antlion enemies and is also riddled with traps, making it a challenge to navigate.

Removing the background walls will remove the biome in a similar fashion to Spider Caves. 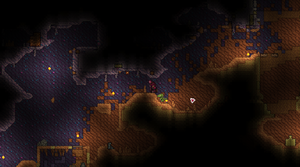 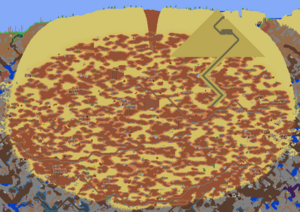 A world view of an Underground Desert generated in 1.3.0.1 with a Pyramid. Note the large Pit-type entrance.

See Desert for more information about the surface entrances to the Underground Desert.

None of the Underground Desert enemies require an actual Desert biome to spawn. The three "tainted" Ghouls each only spawn in their respective Corrupt/Crimson/Hallowed biomes. When in an evil biome, dark-haired Lamia will replace their counterpart and Desert Spirits will replace Sand Poachers. Antlion Larvae only spawn when Antlion Eggs are broken.

To successfully spawn an enemy on a selected tile, the following checks are done:

Mobile version
V • D • E
Surface Layers
Underground Layers
Mini-Biomes
Structures and Other Biomes
Retrieved from "https://terraria.wiki.gg/index.php?title=Underground_Desert&oldid=863764"
Categories:
Hidden categories:
Cookies help us deliver our services. By using our services, you agree to our use of cookies.