Not to be confused with the Latin plural of Terrarium.

The very world is at your fingertips as you fight for survival, fortune, and glory. Delve deep into cavernous expanses, seek out ever-greater foes to test your mettle in combat, or construct your own city - In the World of Terraria, the choice is yours!

Terraria (/təˈrɛ.ri.ə/ tə-RAIR-ee-uh[1]) is a video game developed by Re-Logic. It was first released as a game for Windows on May 16th, 2011 but has since expanded to several other platforms. It is a 2D action-adventure, open-world sandbox / platformer game in which the player controls a single character in a generated world.

Both single-player and multi-player are supported. Besides English, the in-game language can be set to German, Italian, French, Spanish, Russian, Simplified Chinese, Brazilian Portuguese, and Polish. The gameplay has several similarities to the well-known Minecraft and was partially inspired by it.[2] However, there are also a large number of differences, like its several bosses and events.

It has been announced that a follow-up, Terraria 2, is planned for the future. A spin-off of the game called Terraria: Otherworld was under development, but was officially canceled on April 12th, 2018.

Terraria is the world's 9th most sold video game, with over 44.5 million sold copies as of May 2022, including paid mobile downloads.[3]

Terraria is purchased via a one-time-payment. Updates are free afterward. The price differs between game versions (see below) but generally ranges between US$5-20. Various sales occasionally lower the price, to as low as US$1.99[4]. Some platforms also offer trial/demo versions.

There is also a Collector's Edition and Special Edition which may cost slightly more but include additional merchandise.

Terraria is available on multiple PC, console, and mobile platforms, but this wiki distinguishes between the five main versions; the old generation as well as the following four versions.

The Desktop version is the most extensive, featuring nearly everything ever introduced to Terraria. Traditionally being limited to Windows, the official release of Terraria on macOS and Linux platforms on August 12th, 2015 and further expanded the computer versions game from being just Windows-only.[5] The Windows version costs US$9.99 on Steam.

On this wiki, entries that regard content exclusive to the Desktop version will be marked with

Desktop-Only Content: This information applies only to the Desktop version of Terraria.

The Console versions of Terraria are split in terms of extensivity. The

Xbox One, and the

PlayStation 4 editions of the game are equivalent to Desktop 1.4.4.9. The

Nintendo Switch edition of the game is equivalent to Desktop 1.4.4.9. The

Wii U editions of the game are equivalent to Desktop 1.2.4.1, and also lack content found on the Desktop and Mobile versions. These versions are not planned to be updated past the 1.2.4.1 equivalent.

On this wiki, the

Switch version will have a separate section in the history section due to its differences with the primary console version.) Content exclusive to the

. The following banners may also be used:

Console-Only Content: This information applies only to the Console version of Terraria.

The Japanese release of Terraria is produced by Satoru Honma. Developer Spike Chunsoft localized the PlayStation 3 and Vita versions for release in Japan, including exclusive anime cross-over content for that release with anime cameos and vanity sets.

On this wiki, entries that regard content exclusive to the Japanese Console version will be marked with

Japanese console-Only Content: This information applies only to the Japanese Console version of Terraria.

Old-gen console version, Kindle Fire HD and prior will no longer receive updates past 1.2.4.1.

On this wiki, entries that regard content exclusive to the Mobile version will be marked with

Mobile-Only Content: This information applies only to the Mobile version of Terraria.

The 3DS version is similar to the pre-1.3.0.7 Mobile version, holding many of the now removed Mobile-exclusive features such as Lepus. It also contains a large amount of content from Desktop 1.2.1 to Desktop 1.3.0.1.

On this wiki, entries that regard content exclusive to the 3DS version will be marked with

3DS-Only Content: This information applies only to the 3DS version of Terraria. 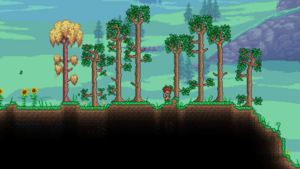 A newly created character in a forest.

Players begin by creating a character, and then a world. Multiple characters and multiple worlds can be created. World generation is based on random seeds, so two worlds are generally never the same. The game starts with the character spawning in the middle of their new world, armed with a Copper Shortsword for protection (a Wooden Sword in the Nintendo 3DS

version), a Copper Pickaxe for mining, and a Copper Axe for gathering wood. The player is then encouraged to gather resources (such as ore), build a base for defense against enemies, and generally overcome various game challenges. Hints to aid the game progression are provided by the Guide NPC who spawns nearby.

The game includes a wide array of features. Players will generally be spending their time exploring, building things, collecting/creating items (mainly for empowering the character), fishing, and fighting monsters and bosses. As Terraria is a sandbox game, players are not locked into working towards any singular goal and can decide for themselves what to pursue. One popular goal is to make one's character as strong as possible and ultimately defeat the game's hardest bosses and events, such as the Moon Lord. 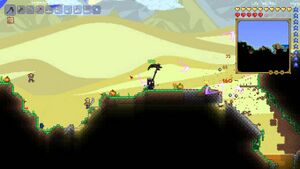 A hardmode character fighting off the Pirate Invasion event.

Terraria can also be played in multi-player, in which more than one character can play in the same world. Multi-player games are either cooperative games where players work together to build things or overcome challenges as in single-player or competitive PvP games where players or teams fight against each other.

The time system of Terraria is real-time, the in-game time furthermore cycling between day and night. The game can, however, be paused (in single-player), but only if the autopause option is enabled in the settings. It is also possible to save and exit the game whenever desired and resume later. However, the character will teleport back to their spawn point.

V • D • E
Terraria
Community
Canceled Games
Retrieved from "https://terraria.wiki.gg/index.php?title=Terraria&oldid=866005"
Categories:
Hidden categories:
Cookies help us deliver our services. By using our services, you agree to our use of cookies.