This article is about the event. For other uses, see Pirate (disambiguation).

"The pirates have arrived!"

The Pirate Invasion is a Hardmode event where pirate-themed enemies spawn and swarm the world's original spawn point. A Pirate Invasion can occur randomly after certain conditions are met, or alternatively when the player uses a Pirate Map.

For a single-player invasion, the player must kill 120 pirates before the event is completed. This number increases with each additional player.

Once the first Pirate Invasion in a world has been defeated and a suitable house is vacant, the Pirate NPC will move in. 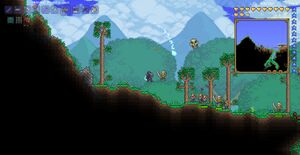 A group of Pirates.

The Pirate Invasion can be summoned manually using a Pirate Map, which drops from all enemies in the Ocean biome.

If the following conditions are fulfilled, a Pirate Invasion can also occur randomly:

The chances of a random Pirate Invasion are as follows:

When a Pirate Invasion occurs, it will be announced by a status message; either "Pirates are approaching from the west!" or "Pirates are approaching from the east!" The message will repeat several times until the pirates reach the initial spawn of the world or any area of the world above the surface which has a nearby NPC. When the pirates' initial wave reaches the spawn, their arrival is announced with "The pirates have arrived!"

If the first status message says "west", then the initial pirates will come from the left. Otherwise, if the message says "east", they will arrive from the right. Note that these directions are not related to the apparent motion of the sun and the moon, which, in Terraria, appear to move from left ("west") to right ("east").

"Pirates" redirects here. For the friendly NPC, see Pirate.
Characters
Unique Drops
From all enemies (except Pirate's Curses and Parrots):
From the Flying Dutchman:
From Pirate Corsairs, Crossbowers, Deadeyes, and Deckhands:
Music

Walk the Plank • “Triumph over a pirate invasion, a group of pillagers from the sea out for your booty... and your life!”
Defeat the Pirate Invasion for the first time.