The Old-gen console version of Terraria was published by 505 Games and developed by Engine Software. It is a port of the

Wii U. Due to hardware requirement issues and memory constraints, this version cannot receive significant updates past the

Terraria was released in the PlayStation Network in Japan during May 2013. It was translated by Japanese video game development and localization company Spike Chunsoft.

The Japanese old console versions (PS3, PS Vita, Wii U) seem to have everything the U.S. console versions have, aside from Purple Thread (instead, they use White Thread) and due to copyright issues, the Hero's set was replaced with the Monokuma set, and the Plumber's set was replaced with the Shiren set. They also have other exclusive costumes, crafted from the exclusive White Thread, shown below.

uses Purple Thread (むらさきのいと) instead of White Thread, and has the green Hero's set (ゆうしゃの衣装) and Plumber's set (はいかんこうの衣装).

Japanese PS4 now uses Green Thread (instead of White Thread), and the Hero's set and Plumber's set were added. The Monokuma and Shiren sets are still obtainable, however the other sets appear to have been removed. [4]

Verification Needed
The information in this section or page needs verification for much of its information. Help the wiki by confirming or correcting information at its discussion page.
Players are needed to verify which Japanese consoles have which items.
\
Exclusive to 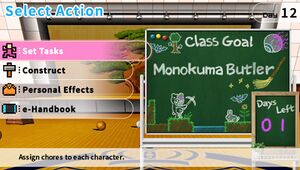