Desktop/Console/Mobile-Only Content: This information applies only to the Desktop, Console, and Mobile versions of Terraria.
Moon Lord 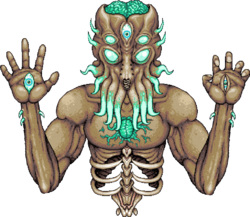 Moon Lord is a Hardmode, post-Lunatic Cultist boss. He is the final boss of the

Moon Lord can be spawned by destroying the four Celestial Pillars or by using a Celestial Sigil in any world where Golem has been defeated. After 12 seconds when using a Celestial Sigil he will spawn after the status message "Impending doom approaches..." appears. After this message appears, the screen will go dim and all objects and walls will oscillate back and forth. It will then go back to normal. This will happen 5 times; each time the screen will go darker and all objects and walls will oscillate more violently until the 5th time, when Moon Lord will spawn. If using a Celestial Sigil to summon it, the darking screen and oscillating objects will only happen once. The moment it comes to normal, the Moon Lord will spawn.

See below for the Moon Bite debuff inflicted by Moon Lord.

While Moon Lord is alive, his exclusive music Moon Lord will play. When Otherworldly music is enabled, the track Lunar Boss (Otherworldly) will play instead.

Moon Lord has two hands and a head that must be killed before his core becomes available for attack. He positions his two hands on either side of the player some distance away.

Each hand, as well as his head, contains a vulnerable eye-like target that is each periodically closed off and opened via an eyelid. These may only be damaged during their "open" states. The core, which is the only part required to be destroyed in order to defeat the boss, only becomes vulnerable when all eye sockets are destroyed.

Moon Lord can teleport to players if all of them get too far out of range.

After defeating the Moon Lord, the credits will appear while the song Journey's End plays. Besides his other loot, Moon Lord always drops Luminite, allowing the crafting of end-game materials.