From Terraria Wiki
Jump to navigation Jump to search
Flamethrower

The Flamethrower is a Hardmode ranged weapon that uses Gel for ammunition. It inflicts the On Fire! debuff for 20 seconds.

For a standard Flamethrower, every press of the ⚒ Use / Attack button consumes one Gel and generates five "lines" of fire in quick succession that can be spread over an area by moving the mouse while firing. With some modifiers that increase firing speed (e.g. Unreal and Rapid), each attack consumes two Gel and fires six lines.

Its best modifier is Unreal. 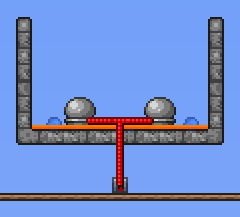