Accessories are equipable items that can provide stat boosts and/or special abilities, such as limited flight. Accessories must be placed in a character's equip accessory slots to work, with the exception of some informational accessories which work simply by being in a character's inventory.

In Journey and Normal mode worlds it is possible to benefit from five accessories simultaneously (given there are no override effects - for example, it is not possible to use more than one wings accessory at the same time). In Expert Mode a sixth slot is obtainable by consuming a Demon Heart. Ultimately, Master Mode includes a sixth slot by default which, when combined with a Demon Heart, provides seven slots. Neither the Demon Heart slot nor the Master Mode slot is functional in Normal mode worlds, and both will only function when the difficulty is set to the corresponding level in Journey Mode worlds.

No duplicate accessories may be equipped, but the Tinkerer's Workshop can combine many accessories together into new accessories with multiple effects. For example, Hermes Boots (or another similar accessory) and Rocket Boots can be crafted into Spectre Boots. Conversely, throwing combined accessories into the Shimmer will transform them into the base components used to craft them.

Each accessory slot also has a respective vanity slot (as well as a dye slot) which allows a character to equip twice the amount of accessories (though only if they are visible on character) for cosmetic or storage purposes. Accessories can be set to be invisible on the wearer but still provide their buffs.

Most Shields, a type of accessory, can synergize with the Brand of the Inferno to block attacks, granting the Striking Moment buff. 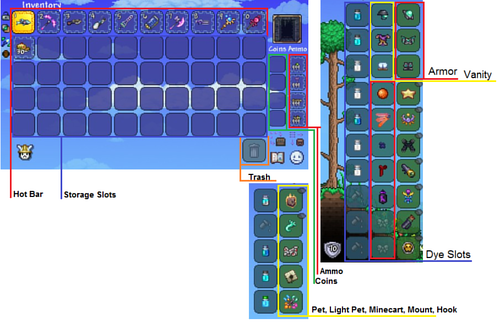 Most accessories (and weapons) can have modifiers affecting the user's (or weapons') statistics. Most eligible items will get a modifier upon creation, but an item can also gain one later, or have its modifier changed: "Reforging" is a service provided by the Goblin Tinkerer at sometimes-considerable cost. Modifiers provide bonuses that are broadly useful, such as movement speed or increased defense, for as long as the item is equipped (this is also required for some informational accessories whose special effects work without being equipped). Accessories can only get bonuses from modifiers, never penalties. Accessory modifiers can provide from 1 to 4 points of defense, 20 points of mana capacity, or from 1%-4% bonus on any of several stats: Damage (for any attack), critical strike chance (any attack except summons), movement speed, or melee speed. In all cases, the bonus applies only when the item is worn in a non-vanity accessory slot. Modifier bonuses stack freely, all worn items will accumulate. Thus by reforging all five allowed accessories to the same modifier, a player can have their choice of +100 mana capacity, +20 defense, or +20% on one of the affected statistics.