Torches attacking the player during The Torch God event 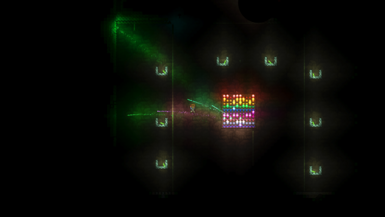 The Torch God event in a simple arena, with various colors of Torches, and Glowsticks to provide lighting.

The Torch God is an event that is initiated by clustering a large number of Torches underground. It consists of dodging projectiles, and survivors are rewarded with the Torch God's Favor, an item which gives the player the option for their Torches to automatically match the biome they are in. Making sure Torches match the biome type they are in will positively influence the player's luck in most areas.

The event can begin once at least 101 Torches of any type are placed in close proximity below the Surface layer in any biome. It is possible for the event to start with less than 101 torches placed if the player is moving, due to the game's calculation incorrectly counting some Torches more than once. The Torch God will not begin for any character who has already consumed the Torch God's Favor or has one in their inventory.

As the Torch God begins, Torch flames shoot off at the player as projectiles, one at a time. They are fired in a random order, at a rate of three per second. The fireballs deal 40 / 80 / 120 base damage,[1]and pass through blocks to reach the player. After passing the player, they do collide with blocks, however. Each Torch shoots one fireball and extinguishes itself afterward, as if it was switched off via wire. For the entire duration of the event, the player is inflicted with the Blackout debuff, significantly reducing their vision.

The Torch God ends once all nearby Torches have been spent, to a maximum of 200 attacks. If at least 95 Torches fired, the player is rewarded with the Torch God's Favor item.[1] All Torches re-light when the event ends. If the player dies or leaves the area, the event ends early and nothing is awarded.

While the event is active, the music Boss 3 will play. When Otherworldly music is enabled, the track Wall of Flesh will play instead.

Torch God • “Invoked the wrath of the God of Torches, and survived long enough to earn its blessing.”
Use the Torch God's Favor. 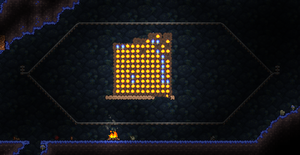 A basic arena using a loop of Minecart Tracks.

These are some brief ideas for creating a favorable environment to take the event in: