"Slime is falling from the sky!" 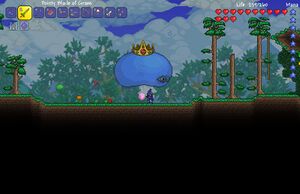 King Slime spawning during Slime Rain. Note the falling slimes in the background.

Slime Rain is a minor event that consists of frequent spawns of Green, Blue, and Purple Slimes, and rarely Pinky. It occurs randomly, signaling its beginning with the message "Slime is falling from the sky!". Slime Rain continues until 150 slimes have been defeated, at which point King Slime will spawn. If King Slime has previously been defeated in the world, he will spawn after only 75 slimes have been defeated. The event ends shortly after he is defeated or despawns. All slime spawns from the event will be continuously hostile, unlike naturally spawned slimes.

While a Slime Rain is active, Green, Blue, and Purple Slimes will appear to fall in the background. The event can last anywhere from 9 to 15 in-game hours. If the player fails to defeat 150 / 75 slimes by the end of the Slime Rain, the message "Slime has stopped falling from the sky." will appear and the Slime Rain will end naturally without King Slime spawning. The event does not end if the player leaves the world.

A Slime Rain cannot be initiated manually, so in order for it to occur, the following criteria must be met:[1]

Sticky Situation • “Survive the slime rain, where gelatinous organisms fall from the sky in droves.”
Survive the Slime Rain.