Not to be confused with the Frost Moon, an event with a similar theme.
"The Frost Legion has arrived!" 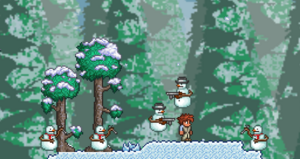 The Frost Legion is a Hardmode event during which unique Snowman enemies spawn and swarm a player's spawn point, similar to the Goblin Army. It is summoned using the Snow Globe, and defeating it unlocks the Santa Claus NPC.

The Frost Legion must be summoned using the Snow Globe, which is acquired from Presents obtained during the Christmas seasonal event ( December 15–31 / December 1–January 15 / one in-game day after defeating Frost Moon). Unlike the Goblin Army, the Frost Legion can only be summoned by the player, using the Snow Globe. The Legion will never invade on its own. Similarly, while Presents only drop during the Christmas event, they can be opened anytime. To obtain a Snow Globe, the present must be opened in Hardmode, but not necessarily during Christmas. Even though the Snow Globe can only be obtained in Hardmode, the Frost Legion can be summoned in a pre-Hardmode world, and it does not need to be during Christmas.

When summoned, a status message will appear: "The Frost Legion is approaching from the [east/west]!"

The direction specified in this message only pertains to the initial wave of Snowmen, which spawns at the world's edge and travels to the player's original spawn point. Additional waves spawn immediately within the player's original spawn area. If the message says "west", the Snowmen will come from the left. If the message says "east", they will arrive from the right. Note that these directions are not related to the apparent motion of the sun and the moon, which, in Terraria, appear to move from left ("west") to right ("east").

When the Frost Legion is about to begin spawning around the player's spawn point, the following status message appears: "The Frost Legion has arrived!" The theme music will switch to the Boss 3 theme.

Do You Want to Slay a Snowman? • “Triumph over the frost legion, a festive family of maniacal snowman mobsters.”
Defeat the Frost Legion for the first time.