"The master and core of the world." 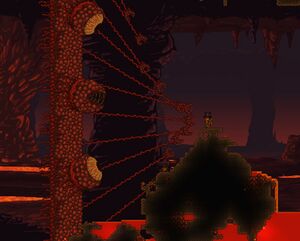 A player facing the Wall of Flesh.

The Wall of Flesh is the final and strongest pre-Hardmode boss, spawnable only in The Underworld. Once it is defeated, the world permanently converts to Hardmode, which brings new content and challenges.

To defeat the Wall of Flesh, the player must attack either its eyes or its mouth. They all share the same life counter, so attacking any of the three will deplete the total health of the boss. However, the eyes have less defense (thus taking more damage) than the mouth. No other parts of the Wall can be damaged.

See below for information on the two exclusive debuffs from the boss, Horrified and The Tongue.

Mobile version, the Wall of Flesh can also be summoned by letting the Guide be killed in the Underworld while the Guide is in contact with lava. Using this method, the Guide can die by any means, either from a player, an enemy or the environment, as long as he is touching lava when he dies.[1]If a Mediumcore player dies in lava (in the Underworld, and Guide is alive) with a Guide Voodoo Doll in their inventory, the Wall of Flesh is summoned.

The Wall of Flesh's sweep direction is determined by its spawn location. Spawning it on either side of the world will cause it to sweep in the opposite direction (regardless of the direction the Doll was thrown). Maximum fight space can be achieved by spawning it at the extreme right or left of the world, though these areas have fewer natural structures and may require additional lava survival gear or construction. Be aware of the fact that The Wall of Flesh might not fight but just leave the battle if you spawn it too close to the edge.

The Wall of Flesh will spawn level with the tile of lava that destroys the Guide Voodoo Doll, then begins adjusting to the player's current tile height.

The Wall of Flesh is very large, occupying the entire screen vertically. Once spawned, it slowly sweeps across the map in a single direction, forcing the player to constantly move away for the duration of the fight, while also contending with the Underworld's usual hazards, if possible. It must be killed before it reaches the other end of the map, otherwise, it will despawn and all players in The Underworld will die (with the unique death message "<Player name> was licked." or "<Player name> got to 1st base with the Wall of Flesh!").

Once the Wall of Flesh has spawned, all players in the Underworld within 1800 feet will be inflicted with the Horrified debuff. The debuff lasts until either the player or the Wall of Flesh dies. If a player dies and then returns to the battle, they will again be inflicted with the debuff. While this debuff is active, players cannot flee the battle, i.e. attempting to escape the Underworld via a Magic/Ice Mirror, Recall Potion, Teleporter, or running far ahead of the Wall and leaving will cause the player to die instantly with the unique death message "<Player name> tried to escape." Exiting the game and re-entering the world allows for escape, but causes the Wall of Flesh to despawn.

Attempting to leave the Underworld or to get behind the Wall of Flesh will inflict The Tongue debuff. When it is activated, a tendril will snatch the player and draw them into the Wall of Flesh's mouth at a speed of up to 56 mph, ignoring blocks in the way, and dealing high damage to the player (50 damage per second). The player will be unable to move or use items while the debuff is active.

The movement speed of the Wall of Flesh depends on its health as follows:[2]

When the Wall of Flesh is killed, it leaves its drops in a midair frame of Demonite Bricks for Corruption worlds, or Crimtane Brick for Crimson worlds. It will always drop the Pwnhammer, which is required to generate Hardmode ores in the world. (Generated by destroying altars)

After defeating the Wall of Flesh for the first time, the status message "The ancient spirits of light and dark have been released." displays and the world permanently converts to Hardmode. Hardmode brings new biomes, new and tougher enemies, and a vast array of new equipment.

Two diagonal stripes of Hallow and Corruption or Crimson form in a "V" pattern from the center of the Underworld, all the way to the surface. Corruption/Crimson and Hallow will spread at a much faster rate, eventually covering large areas of the world if no action is taken.

It's Hard! • “Unleash the ancient spirits of light and darkness across your world, enabling much stronger foes and showering the world with dazzling treasures (and rainbows!).”
Enter Hardmode.

For more elaborate strategies on defeating Wall of Flesh, including weapon and arena recommendations, see Guide:Wall of Flesh strategies.