Plantera is a Hardmode boss that can be fought in the Underground Jungle after all three mechanical bosses (The Destroyer, Skeletron Prime, and The Twins) have been defeated. Plantera drops a Temple Key upon defeat, allowing access to the Jungle Temple.

While Plantera is alive, her exclusive music Plantera will play. When Otherworldly music is enabled, the track Plantera (Otherworldly) will play instead.

After all three mechanical bosses have been defeated, Plantera's Bulbs will randomly spawn in the Underground Jungle (indicated by the status message "The jungle grows restless..."). Destroying one of these bulbs will immediately cause Plantera to spawn, usually a fair distance off-screen. The bulbs can be broken in various ways including: with a pickaxe or drill, with Dynamite, with lava, or if the Jungle grass underneath them is removed, e.g. via biome spread, actuating the blocks, or the Clentaminator. 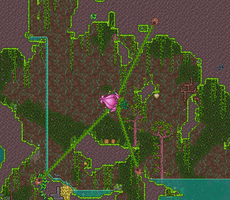 Plantera creeps after the player, deals damage on contact, and fires the projectiles listed in the following table at them. She generally keeps distance from the player, focusing on her ranged attacks.

Seeds and Poison Seeds are similar to the stingers of Hornets and Queen Bee, and the petals of the Flower Pow. On the

Mobile version, the green Poison Seeds have a 50*1/2 (50%) / 100% chance to inflict the Poisoned debuff. Thorn Balls are similar to the projectiles released by Spiky Ball Traps, bouncing around erratically. They will try to follow the player horizontally, potentially overwhelming the player if they stay in the same area for too long.

There is a short cooldown after a projectile has been fired, which depends on Plantera's health as well as the type of the projectile:

Once Plantera is brought down to half of her maximum health (15,000 / 21,000 / 26,775), she changes to her second form: her pink petals fall away to reveal a thorn-filled mouth. In this form, Plantera ceases to fire the projectiles from before and instead moves more aggressively in attempts to make contact. Her contact damage is greater than in the first form, but her defense decreases significantly to 10.

Plantera's Tentacles, that are attached via vines to her body. These deal contact damage and get in the way of the player's attacks, but have comparatively little health. Defeated tentacles will not regrow, making Plantera much easier to fight once all are killed.

Plantera now occasionally releases floating pink spore projectiles that drift towards the player, similar to the spores released by the Giant Fungi Bulb. They can be destroyed in a single hit with any weapon or tool, but travel through blocks and deal high damage. Similarly to the first phase, the cooldown between releases depends on Plantera's health:

In Expert Mode, there are a few significant differences in Plantera's attacks, aside from the default increased health and damage.

In the first form, her pink Seeds can travel through blocks, and all projectiles have limited homing capabilities. The cooldowns are also decreased:

In her second form, Plantera and Plantera's Tentacles move faster than normal. In addition, there are nine more Plantera's Tentacles, attached to Plantera's Hooks in groups of three. Furthermore, the eight tentacles that are attached to Plantera's body can respawn after they have been killed (this does not apply to the tentacles on the hooks). The rate is randomized, but it depends on the number of tentacles that are alive – if all are dead, a new tentacle will be spawned after 5 seconds, on average. This is increased by 5 seconds per living tentacle, hence it takes an average of 180 seconds for all eight tentacles to fully respawn. A single defeated tentacle will take 40 seconds to respawn, on average, assuming the other seven tentacles remain alive for the duration.[1]

Plantera always drops a Temple Key, which grants access to the Jungle Temple and the Golem boss. In the

version, Temple Keys can also be combined with Biome Key Molds to craft Biome Keys; but in the

Mobile version, Biome Keys drop in their respective biomes and do not require molds.

A status message saying "Screams are echoing from the dungeon..." will appear upon Plantera's defeat, signaling that new, more difficult enemy types will begin spawning in the Dungeon (see details). These drop powerful new weapons, accessories, and other items. Dungeon Spirits will begin to appear when Dungeon enemies with more than 100 health are slain, which drop Ectoplasm, a new crafting material that offers access to the Pumpkin Moon and Frost Moon events, as well as Spectre Bars.

The Great Southern Plantkill • “Defeat Plantera, the overgrown monstrosity of the jungle's depths.”
Defeat Plantera for the first time.