Desktop/Console/Mobile-Only Content: This information applies only to the Desktop, Console, and Mobile versions of Terraria.
Pylons

Pylons are furniture items that appear as a large stone or crystal hovering and rotating above a biome-themed stand. They allow a player to teleport to any other pylon by pressing the ⚷ Open / Activate button on them, which will open the fullscreen map, and selecting the other pylon there. Pylons are only practical if there are 2 or more in the world. The system they form is referred to as the Pylon Network.

The following restrictions apply to the biome pylons (all pylons excluding the Universal Pylon):[1]

The following restrictions apply to all pylons (including the Universal Pylon):

Some status messages will display when pylons are not properly used.

If the player is more than 5 tiles away from the pylon which they are using:

If there are less than 2 NPCs near the destination biome pylon:

If there are less than 2 NPCs near the interacted biome pylon:

If a boss or an hostile event is active:

If a biome pylon is not in its respective biome:

If a pylon is in front of natural Lihzahrd Brick Walls before defeating Plantera:

Additionally, no special status message will be shown if the player attempts to place a second pylon of the same type in a world. Instead, the pylon will simply not be able to be placed, and its Placement Preview will be fully red. 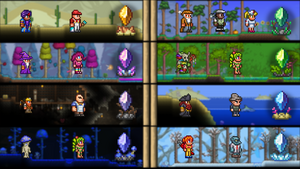 A suggestion of one kind of pairings that allows buying pylons. 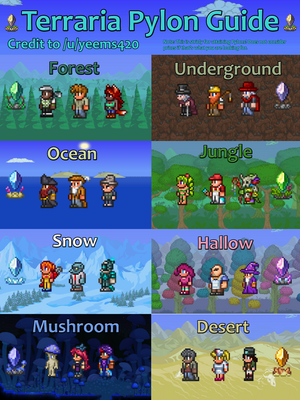 Another guide to groupings to allow pylon purchases.

The table below indicates which NPCs could be housed in the biome appropriate to the pylon (at a distance from other NPCs) to ensure that one of them is happy enough to sell the pylon. These are only examples and are not a complete list of every combination that can be used to obtain a pylon.