From Terraria Wiki
Jump to navigation Jump to search
Dryad 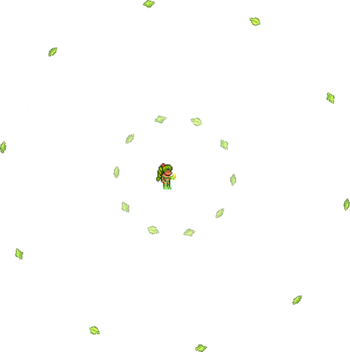 A Larger view of Dryad's Blessing.

The Dryad is an NPC vendor that will spawn once the following criteria have been met:

In addition to selling items, the Dryad can also report the percentages of Corruption/Crimson and Hallow that exist in the current world.

Mobile version, when enemies are nearby, the Dryad will periodically grant the Dryad's Blessing buff to players and other town NPCs in the vicinity and displays a leaf barrier effect. The buff grants +8 defense to players and +6 / +10 / +14 defense to town NPCs, increased health regeneration, and gives the player (and town NPCs) a Thorns effect. Enemies within the leaf barrier and with clear sight to the Dryad will be inflicted with the Dryad's Bane debuff, which will deal 4+ damage per second (plus various progression-based damage boosts, and all multiplied by 1× / 1.5× / 1.75×); the minimum damage dealt by the Dryad's Bane debuff is 4 / 6 / 7 per second.

Note: All item prices can be decreased by equipping a Discount Card or Greedy Ring. On the

Mobile version, prices can also be higher or lower based on the NPC's happiness level.

The Dryad will report the current percentage of Corruption/Crimson/Hallow coverage in the world with the "Status" option. The Dryad makes the distinction between Corruption and Crimson if they are present in the same world, and will list their percentages separately, though they both contribute to the overall total evil tile percentage in her final report.[2]

If the world has no Corruption, Crimson, or Hallow, the And Good Riddance! achievement will be granted upon choosing the option.

When submerged in Shimmer, the Dryad will transform into her Shimmered form. This has no impact on gameplay or dialogue and is only a visual change. She can be returned to her classic look by submerging her in Shimmer again.

The Dryad may have any of the following names: