From Terraria Wiki
Jump to navigation Jump to search
NPCs

Standing near an NPC and pressing the ⚷ Open / Activate button on them will open a dialogue window with one or more options for the player to select. Most NPCs are vendors, displaying a shop inventory when the "Shop" option is selected. They sell items to players in exchange for coins, and can be sold items by a player to obtain coins. Some NPCs also have other options that perform other functions.

Most NPCs are town NPCs, appearing after various milestones are achieved in game advancement. They move into structures the player must provide, known as houses, which are generally required for town NPCs to remain available. Each NPC will need their own house.

NPCs can reduce enemy spawn rates in the area, the effectiveness of which will increase as more NPCs are present, capped at 3 NPCs.[2] However, this enemy spawn reduction effect will be weaker in the Underworld, and is negated in some circumstances (see Town § Notes for details). Players tend to utilize this effect by building large structures (e.g. bases) with several integrated houses, to serve as their safe area.

Town NPCs generally walk around during the day. They remain still in their assigned houses at night and during certain events. NPCs have limited health and can take damage, and ultimately die from enemies, traps, lava, or by drowning in water; however, they cannot be attacked directly by players (outside of special Voodoo Doll accessories, Rotten Eggs, or the Flymeal). They do not suffer from fall damage and their health regenerates over time. The Nurse can furthermore heal herself and other nearby NPCs. Additionally:

If an NPC is killed, they will respawn after a delay, as long as a suitable vacant house is still available. If the NPC has an inventory or population requirement for their initial spawn (e.g. the 50 requirement for the Merchant), that has to be met again for the respawn. However, a rescued NPC will stay rescued, and respawn without needing to be found again.

1 NPC(s) can be encountered that do not move into houses.

Each town NPC requires a suitable, vacant house. A house is a room of a certain size enclosed by a frame of blocks, with player-placed background walls, along with a valid light source, flat surface item, and comfort item. Two town NPCs cannot live in the same house at the same time. Houses must not be located near Corruption or Crimson, and if those biomes spread too close to an occupied house, the NPC living there may move out from that house.

Town NPC home assignments can be rearranged using NPC flags from the housing menu, where players can also check whether a room is a suitable house.

If a house occupied by an NPC is damaged in a way that makes them invalid, the NPC will move out and walk around the area until a suitable house is restored. If there are vacant houses available in the world, the NPC may move into one of them. If the NPC gets killed and does not have a home, they will not respawn until a new house becomes available.

The Guide and Old Man are unique in that they always spawn upon creating a world. The Old Man does not move into a house, but rather remains near the Dungeon's entrance, and respawns the following day if killed (while Skeletron has not yet been defeated).

Some NPCs sell biome-specific items when they are spoken to in certain biomes. They can be transported there by housing them there and waiting for the night (they will be teleported to their house at night once off-screen) or by using a King or Queen Statue. Note that the NPC does not need to live in the biome; talking to them while the player is in the biome is sufficient.

All NPC vendors can also be used to sell unwanted or surplus items to gain coins. The unwanted item(s) must be in the player's inventory. Hovering over the item while the NPC's inventory screen is open will display its sell value. Items are always sold to vendors at 1/5 of their purchase price. Not all items have a sell value (very common items such as Dirt or Wood have no value). Placing the item in the NPC's shop inventory will sell it, granting the player the sell value into their inventory. Sales to ( and purchases from) NPCs can be cancelled while the NPC's inventory screen is still open: Sold items can be taken back in exchange for the amount they were sold for (and on

Mobile, purchased items can be sold back in exchange for the amount they were purchased for).

All NPC vendors have the same base buying and selling price. Item prices can be decreased by equipping a Discount Card, which is a rare drop from Pirate Invasions. On

Mobile, prices can also be higher or lower based on the NPC's happiness level.

All NPC vendors will sell pylons when their happiness level is above a certain threshold.

The NPCs are listed in the order in which they are generally likely to be acquired. See Living preferences below for

Mobile biome and neighbor preferences. The term "other town NPCs" always includes the Old Man, Traveling Merchant, and town pets, but not the Skeleton Merchant.

Desktop/Console/Mobile-Only Content: This section's information applies only to the Desktop, Console, and Mobile versions of Terraria.
Not to be confused with Pets.

Town pets are special town NPCs that have distinctive housing assignment banners, and can share houses with another NPC. They count as NPCs for pylon requirements and for decreasing enemy spawn rates in an area, but are not counted as neighboring NPCs in other NPCs' happiness calculations, and indeed do not positively or negatively affect the happiness of other NPCs in any way. Unlike other NPCs, town pets have no means of self-defense.

Town pets offer a unique "Pet" option, which places the player directly in front of the pet when selected, and displays a petting animation. The effect is purely visual.

There are currently four types of town pets.

These town pets are obtained by using a pet license sold by the Zoologist. They will appear at dawn (4:30 AM) the day after a pet license item is used, and only one of each kind of pet can exist at a time. The type of the pet can be changed by using another pet license.

Town Slimes are town pets that will move in after certain requirements are met for each specific type. Unlike town pets from the Zoologist, all types of Town Slimes can exist at the same time. This content is transcluded from Town Slimes § Types.

The following NPCs are not considered town NPCs because they do not move into houses.

All NPCs have a base defense stat of 15 (except for the Skeleton Merchant, who has 30), and their base attack stats vary from one NPC to another. In addition, all NPCs gain specific defense and damage boosts based on the bosses that have been defeated so far in the current world. These boosts are completely independent of each other (e.g. the "Hardmode entered" boost can potentially be gained without first attaining the "Eye of Cthulhu is defeated" boost, and vice-versa). The boosts are also permanent for a given world, and are applied instantly to all town NPCs, including all Town pets and all other NPCs.[5]

The Dryad also gains boosts to her attack damage. She does not deal damage directly, but rather by inflicting the

Defeating Deerclops will not give stat boosts to NPCs.

Desktop/Console/Mobile-Only Content: This section's information applies only to the Desktop, Console, and Mobile versions of Terraria.
See also: Guide:NPC Happiness

NPCs have individual preferences about other NPCs or the biome they live in which in turn affects their prices. When selecting " Happiness" in an NPC's dialogue window, the NPC will tell the player if any factors make them currently happy or unhappy, although they will not say what could make them happier or unhappier. For example, if the Guide is located alone in a Forest, he will praise the lack of other NPCs around and the fact he is in a Forest, but he will not hint at the fact he would prefer to live near the Clothier or Zoologist.

For the purpose of calculating distances below, the position of an NPC's home tile is considered instead of the NPC itself, unless the NPC is homeless in which case their actual position is considered. The home tile is the block where NPCs stand on during nights and events. NPC's flag will "hook" directly above the home tile. One can easily find the home tile by locating the central column of the 3×3-tile area that the NPC's flag occupies, and then moving all the way down to the tile in the floor of the house. For more detailed definition of a home tile, see House § Home tile score.

Biome-related preferences will reference the primary biome where the player is, rather than where the NPC or their home is. If the player is in a hybrid biome, and the NPC loves/likes one of the biomes, but hates/dislikes one of the others, the loved/liked biome will take priority. Biomes that the NPC is neutral to are ignored.

The below price modifiers are additive. The price multiplier will always be set to the maximum of 150% (purchasing) and 67% (selling) if the NPC is homeless, more than 120 tiles from their house, or located in the Dungeon, Corruption, or Crimson.[11]

The Princess is liked by all NPCs, and therefore is not put in every column for the sake of less clutter.

Although it may seem to be random, NPCs "emote" about things depending on their environment. 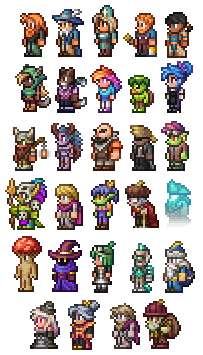 Shimmered variants of the NPCs.

No Hobo • “Build a house suitable enough for your first town NPC, such as the guide, to move into.”
Successfully get an NPC to move into your first House.

Leading Landlord • “Meet with a tenant who's as happy as they possibly can be!”
Talk to any town NPC while its happiness is at its maximum.

The Great Slime Mitosis • “Find all of the Slime Pets and have them move in!”
All Town Slimes are housed in the world.

All in the Family • “Every NPC has moved into your house”
All town NPCs are housed in your world.