Desktop/Mobile-Only Content: This information applies only to the Desktop and Mobile versions of Terraria.

The Camera Mode icon next to the housing icon.

Camera Mode is a special mode introduced to the

Desktop version in 1.3.0.1 for taking screenshots of a Terraria world, providing additional controls to capture images of selected areas of the minimap or screen. Camera Mode is activated by pressing F1 or clicking the camera icon above the Armor dye slots in the inventory, which replaces the gameplay interface with a specialized image capture interface. While Camera Mode is active, mouse control is used to frame the picture, and the player can neither build nor use items, but selecting an item on the hotbar using the number keys or pressing Esc will cancel Camera Mode.

Unrevealed sections of the world will not be uncovered by Camera Mode, represented as black swaths similar to ordinary unexplored areas on the minimap.

Camera Mode is also present in the

Mobile version of Terraria, although it is not fully functional (images not being stored anywhere or sometimes freezing the game completely), it can still be accessed by plugging in a keyboard and pressing F1 in-game.

The most basic utility provided by Camera Mode, the screenshot, takes a full-size picture of the screen. The interface is hidden in screenshots taken using this function. The produced image is the same size as the viewable window, meaning that the size of produced images will change if the game window is resized. 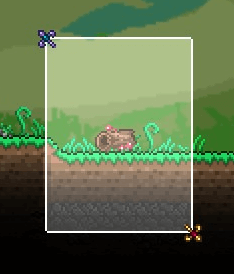 The primary function of Camera Mode is its ability to capture selected areas of the screen by using the frame functions:

Both snapshots and screenshots are saved to the Captures folder and can be accessed by using the "Open Folder" function. This only functions in windowed mode. 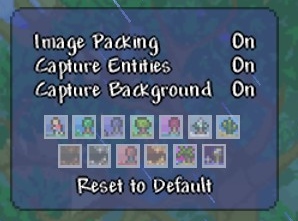 Prior to taking a picture, several options can be selected to modify the camera's output.