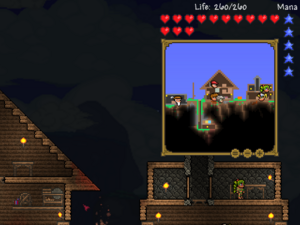 The portrait minimap.
This article is about the minimap function. For other uses, see Map.

The minimap is a scale-size live overview of the world around the character. By default, it is displayed in a square frame in the upper-right corner of the screen.

As the world is explored, areas appear on the minimap with the greatest brightness with which the character has ever seen them. Even if the tiles return to darkness, they will remain visible on the minimap. The rate that the minimap logs new data on is dependent on the current video quality - the higher it is, the faster it will be.

Areas explored without a light source will not be mapped. If a location's appearance is updated (e.g. Meteor landing somewhere), the map will update even if the player has not gone there since it occurred.

In addition, players, friendly NPCs (except Skeleton Merchant and the Old Man), and Bosses appear on the minimap as icons of their heads, which show their character name when the cursor moves over them. This makes it easy to find NPCs, keep track of other players in multiplayer, and aids in fighting Bosses. In PvP, only players on the same team can see each other on the minimap.

The minimap can be disabled from the Settings screen. 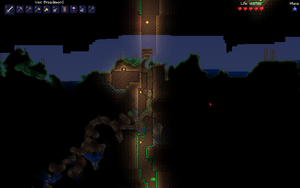 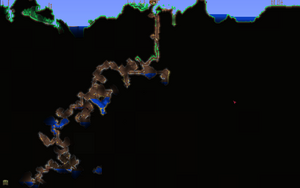 Map Pings on the minimap.

The minimap has four modes: portrait, overlay, hidden, and full screen. By default, the Toggle Map Style key toggles the minimap between the first three modes, with full-screen mode available by pressing the Toggle Full Map key. Modes can also be changed by using buttons displayed in the top-right while the Inventory screen is open.

The stylized border of the portrait mode minimap can be changed by opening the Interface menu under settings. One can cycle through 9 different border styles: Default, Valkyrie, Retro, Leaf, TwigLeaf, StoneGold, Sticks, Remix, and Golden. The Health and Mana bar style can be changed under the Interface menu as well, though there are only 3 options:Classic, Fancy, and Bars.

In the portrait, overlay, and full-screen modes, the keyboard can be used to control the minimap. All controls listed here are defaults, and can be changed in the options menu.

The + and – keys on the numeric keypad zoom the minimap in and out. There is no key to restore the default scale, but the = button on the portrait frame does this.

The Page Up and Page Down keys make the minimap more or less transparent. This cannot be done in full-screen mode. In portrait mode, this only affects the map, not its frame.

The minimap appears when pressing Back (Xbox) or Select (PlayStation).

The minimap appears when the player pinch their fingers on the screen.

This describes old game content that was removed or replaced.
The information here does not apply to the current version of Terraria.

In Singleplayer, If the player pinch their fingers together, but keep touching the screen, the game does not auto-pause and the enemies still move. The player can watch how they act with the surrounding terrain and identify what AI type they are.

The player's character, other players and all NPCs will appear as that person's head, with the exception of the Old Man which will appear as a "enemy circle".

Bosses appear as a large skull icon, except for the Eater of Worlds which appears as lots of monster circles. The Destroyer is a lot of enemy circles with a skull for the head.

Worm-type monsters appear as lots of medium "enemy circles" in a line, due to each body segment being classified as a new enemy.

Tapping on a player/NPC's head icon will display their name.

If the player or someone else is attacked with the minimap open, the unmapped spots on the screen will flash red.