Desktop/Console/Mobile/Switch-Only Content: This information applies only to the Desktop, Console, Mobile, and Switch versions of Terraria.

Secret world seeds are world seeds which have been discovered as secret easter eggs that generate worlds with strange or unique features. Unlike regular world seeds, which affect only the usual world structure, secret seeds can produce worlds with characteristics that would not be attainable through normal world generation, i.e., they can affect the game's mechanics while playing in that world. For instance, they may change enemy statistics and behavior, item drops, graphics, theme music and more.

Secret seeds use unique world-generating mechanics that differ from normal seeds. Using a secret seed overrides the normal use of seeds as a source of randomness and two worlds created via the same secret seed will not necessarily be identical.

Map view of a large world generated with seed 5162020. Note that there is both Corruption and Crimson.

This seed references May 16, 2020, which is Terraria's 9th birthday and the release date of 1.4.0.1. It invokes a highly extraordinary world generation referred to in the source code as drunkWorldGen.[1] It has therefore come to be referred to by the Terraria community as drunk world.

In this seed, both Evil biomes will generate, as well as both variants of any ore that comes in two varieties. The Guide is replaced by the Party Girl as the starting NPC, and the Dungeon entrance is now generated under a Living Tree painted brown.

The world icon of a drunk world shows a tree infected with both world evils.

Main article: Not the bees

Map view of a world generated with seed "Not the bees". 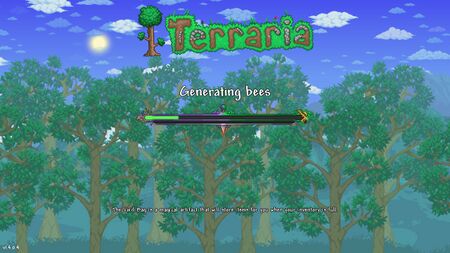 Screen shown while "Not the bees" is generating.

This seed generates a world dominated by bee-themed biomes and bee-related items and structures.

Most of the world is replaced with the Jungle biome, with Hive and Honey Blocks found in abundance, and Larvae spawn throughout the world. The starting NPC is the Merchant instead of the Guide. He will sell the Furnace as per usual in the Jungle.

The world icon of Not the Bees world is a Rich Mahogany surrounded by Bees.

Main article: For the worthy

Map view of a world generated with seed "For the worthy". 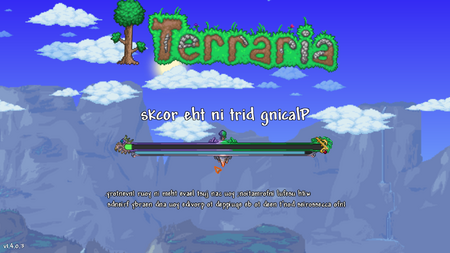 Screen shown while "For the worthy" is generating.

This special world's features aim to drastically increase the difficulty of the game.

All enemies' contact damage, health and coin drop rates are increased, in addition to the world difficulty multiplier, by their standard amount in a normal world. After that, the damage is increased by another 33.33*1/3 (33.33%).[2] Damage from ranged attacks is typically left unchanged. Bunnies (even placed) are replaced with Explosive Bunnies, and all Demons are replaced with Voodoo Demons. The Demolitionist replaces the Guide upon entering the world for the first time.

There are also many other changes to world generations and game mechanics. For instance, some water pools throughout the world are replaced with lava. Pots and trees may drop lit Bombs that shortly explode, instead of their usual items. Skyware Chests are replaced with locked Gold Chests but they still have their respective loot.

The world icon of a "For the worthy" world is a Yellow Willow tree.

Map view of a world generated with seed "Celebrationmk10".

The player's spawn point is on the beach of one Ocean. Andrew the Guide, Whitney the Steampunker, Yorai the Princess, a Party Girl, and an Angora Town Bunny will also spawn there and a Party immediately starts. A majority of the world is painted in bright colors.

Items in chests always have a "best" modifier such as Menacing or Legendary.

Two unique enemies can be encountered in this seed:

The world icon of a Celebration world is a Pink Sakura tree with a bowknot.

Map view of a world generated with seed "The Constant". Note the difference in cave generation.

This seed is part of the crossover with Klei Entertainment's Don't Starve Together.

It introduces hunger and darkness mechanics that make the early game especially challenging. Marble biomes with statues and Spider Caves will generate on the surface, and Cacti will damage the player.

The entire game uses a dark shader that gives the game a gloomier look. Items exclusive to the Don't Starve crossover content are more likely to drop.

The world icon of a Constant world is an Evergreen from Don't Starve.