The default game controls are listed below. These can be changed from the Controls menu in settings on the title screen. While in-game, they can be accessed by opening the inventory, selecting "Settings", and navigating to "Controls".

Desktop-Only Content: This section's information applies only to the Desktop version of Terraria.

Nintendo Switch version of the game utilizes the touch screen in handheld mode to make playing easier. Most of the controls are very similar to controls from the

Mobile version of the game, but some are entirely new. Some of these controls include:

Unlike the mobile version, however, pinching the screen to zoom in and out uses the selected item.

It has been suggested that this page/section be rewritten. [discuss]
Reason: "Needs an update for 1.4.0.5.2 (controller part specifically)"

As of Mobile 1.3, the user interface has been updated to more closely reflect that of the desktop version. However, as mobile users typically will be dealing with touch controls and/or smaller screens, there are a few small differences between the two to make gameplay flow smoothly.

The inventory is primarily split up into 5 sections: The Inventory and Housing Menu on the left, and Chat, Equipment Menu, and Crafting on the right. Like many other UI elements, they can be moved around and altered in the settings.

Akin to the desktop version, The inventory consists of 50 slots. The player can set whether the 10 left most slots or the top row serves as the hotbar.

Some inventory functions have been moved to below the inventory for easy access. These include the tools, research, and a split function. The tools button opens a small window consisting of the various toggles, such as those given by the Paint Sprayer and the Torch God's Favor. Researching is also accessible here, separately from the Journey Mode tools accessible in the pause menu. The split button opens a small slider which splits a stack in two based on its position.

It is identical to the housing menu on desktop, save for an aesthetic change where each NPC fills in a placeholder slot as they move in.

The player can type messages and view status messages in the Chat menu. This window also has a button which allows access to Emotes. It functions identically to the chat on the

Consists of all the equipment the player has equipped. Visibility can be toggled by tapping the show/hide button, but not by double tapping the accessory as seen in the

Consists of a list of craftable items with a Craft button below. The materials needed will be listed next to the button. The player can access all duplicated items here by pressing the duplication button in Journey mode. There are filters for Weapons, Blocks, Accessories, Materials, All (which disables the active filter), Armor, Misc, and Consumables, accessible even outside of Journey mode. 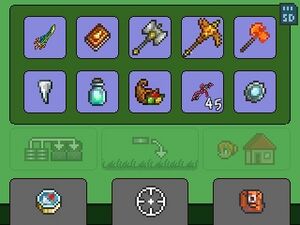 The Quick Inventory as it appears in game.

The touch screen features the players hotbar, housing menu, map, and other utilities. This is referred to by the game as the "Quick Inventory". The quick inventory shows the first ten slots in the players inventory, similarly to the mobile version of the game. The top left button under the hotbar allows the player to Quick Stack to Nearby Chests, which will be greyed out if the player is not near any chest. The middle button allows the player to drop an item they've tapped and held onto, greyed out if there is no item to drop. The top right button is the housing menu, which will be greyed out unless the player is in a house.

The bottom three buttons are the World Map, Building/Precision Mode, and the player's Inventory from left to right.

Mobile version. Items appear on the bottom screen, while an item's statistics will appear on the top. The top ten slots of the inventory will be brightened, indicating items in these slots will appear in the Quick Inventory. Items can be thrown away with

, and stacks of items can be split with

. Below both the trash and split icon is a drop icon. Armor can be equipped with

when selected, but even if that armor is a vanity item, it will be equipped in the armor slots and be swapped with any item currently filling the slot. Also similar to the

Mobile version, items can be dragged between slots opposed to just using button inputs. However, button inputs are still required when equipping or depositing items, as there is no way to drag items between tabs. On the top of the inventory screen are four/five buttons. The first, being a back arrow, causes the player to exit the inventory. The rest toggle the crafting menu, the inventory, the chest's inventory (if applicable), and the player's armor/accessory screen.

Note the options differ when in a chest.

When a chest is opened, controls differ greatly from the regular inventory. To take an item out of a chest,

will loot all of the items from the chest. Items cannot be split or trashed from the chest directly. When the player's inventory is accessed when a chest is available, a quick stack button appears at the bottom left corner of the screen. A deposit button will also appear if an item is selected, but does not share the button shortcut of X with the take button. Thus, the player should be careful they don't trash an item they wish to put back into a chest.

The crafting menu splits up crafting recipes into multiple sections. These sections are:

can be used to switch between categories, and

or the button on the touch screen can be used to craft the selected item. Items can be selected with the D-Pad, Circle Pad, or touch screen. Items that can be crafted will be listed before items that cannot, and will have a blue background. Attempting to craft an uncraftable item show the reason it is uncraftable next to the craft button. Similar to items with long tooltips, an item with a long name as an ingredient will have it's name scroll back and forth.

The armor tab of the inventory. Click here to see the buffs screen.

The player's armor and accessories are on the last tab of the inventory. Pressing

will remove that armor or accessory and place it in the player's inventory. The five eyes below the player image show and hide the player's accessories, so long as they aren't wings.

can be pressed to view the player's current buffs and debuffs as well as their durations. Buffs can be canceled with

when on the screen.

An NPC's shop. The player is able to sell items from their inventory here.

When interacting with a NPC that sells items, the NPC will appear in place of where a chest would appear. Items can be bought from an NPC with

, so long as the player has sufficient funds. Items can also be from the player's inventory with

. When an item is sold to an NPC, that item goes to the Re-Buy slots, a section of 5 slots where items sold recently can be rebought. Unlike shops in the

Desktop version, exiting the NPC's shop inventory will not erase items in the Re-Buy slots, instead, items in said slots will only be erased if the player saves and exits the game.