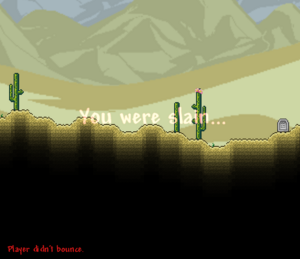 When a player dies, a Tombstone is dropped at the location of their death. When it finds a suitable space, it will become a 2×2 tile. It stores text, much in the way the Sign functions, with the player's death message, and the real-world date. Being affected by physics, a Tombstone will fall after the player's death if they were moving at the time. If there is no flat 2-block space for a Tombstone, it will get stuck before it despawns.

If the player holds more than 10 when they die, the spawned Tombstone will be one of the five following golden Tombstones:

Upon death, a large red text saying "You were slain..." will be displayed on the center of the screen. The amount of dropped coins will be shown underneath, and a timer will display showing how long until the player respawns.

There is a 15-second delay between death and respawn, which is doubled in duration during Expert Mode and Master Mode boss fights. Upon respawning, the player will be placed at the

world's spawn point, or at the most recent

Bed they had set as their spawn point.

Death may occur from:

A Classic (Softcore ) character will drop half, three-quarters, or all of each stack of coins a player is carrying at the moment of death in each inventory slot (always rounded up).[1] Coins stored in storage items are not affected.

A Mediumcore character will drop all carried items, including money and ammo. Maximum health and mana will be kept, and will not be reduced back to the default.

A Hardcore character will also drop all carried items. Furthermore, the character is permanently deleted upon death and the player turns into a ghost, unable to interact with the environment, but still able to observe, move about, and chat with other players.

PvP death messages will use the default death messages from above, but will additionally state the name of the player's murderer along with the weapon or projectile with which the killing blow was landed.

When the Wall of Flesh reaches the far boundary of the world and the player is in front:

When killed by Paladin's Shield:

When attempting to teleport away from the Wall of Flesh with a Magic/Ice Mirror, Recall Potion, Teleportation Potion, Cell Phone, Shellphone, or Teleporter:

When killed by failing to destroy an Altar, the Wall of Flesh's body, or a Jellyfish's shock attack :

When killed by the Companion Cube's stab:

When killed by darkness in a Constant world:

When killed by reaching the top of the world in a Don't dig up or Get fixed boi world:

V • D • E
Combat
Environment
Interface
Items
Game
Multiplayer
Player
Retrieved from "https://terraria.wiki.gg/index.php?title=Death&oldid=863379"
Categories:
Hidden categories:
Cookies help us deliver our services. By using our services, you agree to our use of cookies.