Mimics are rare Hardmode enemies disguised as chests, appearing as the appropriate chest type for the environment.

Mimics can be spawned by the player using the Chest Statue, even prior to Hardmode. However, Mimics spawned this way only drop the Mimic Banner.

Rare Hallowed, Corrupt, and Crimson Mimics can also be spawned manually by players via a Key of Light or Key of Night (see the Biome Mimic section below).

Ordinary Mimics look like chests until approached or attacked, at which point they come to life and chase the player by hopping towards them. Before revealing themselves, they take on the appearance of chests normally found in the biome they are encountered in: regular Chests above the Underground layer, Gold Chests Underground, and locked Shadow Chests in The Underworld.

Mimics that spawn in a Snow biome on Ice or Snow Blocks take on the appearance of Frozen / Ice Chests and also have their own unique set of ice-themed drops.

The Present Mimic is a Frost Moon variant that behaves similarly, but drops many Hearts instead.

Desktop/Console/Mobile/Switch/tModLoader-Only Content: This section's information applies only to the Desktop, Console, Mobile, Switch, and tModLoader versions of Terraria.
Corrupt Mimic

These Mimics are rarer, and much more powerful in every way, than the normal Mimics (they are even more deadly than any pre-Hardmode boss, with the possible exception of the Wall of Flesh). They only spawn in the vicinity of the underground version of their corresponding biome.

Each type has its own set of unique drops, including powerful early Hardmode weapons and tools. Like ordinary Mimics, they only spawn in Hardmode worlds. The Jungle variant spawns only in Celebrationmk10 worlds. On the

tModLoader version, it is unimplemented and never spawns during normal gameplay.

Similar to ordinary Mimics, these special variants disguise themselves as "Chests" until approached or attacked, but they do not resemble any Chest type currently in the game, and are significantly larger than ordinary Chests.

Hallowed, Corrupt, and Crimson Mimics can also be summoned manually by the player, in Hardmode worlds only, by placing a Key of Light or a Key of Night inside an otherwise empty Chest; the Chest becomes a Mimic once it is closed. The natural evil biome of the current world determines whether a Corrupt or a Crimson Mimic is summoned via the Key of Night.

All four special Mimics have the same attack patterns:

The Jungle Mimic has an additional "attack" called the "stuff cannon", which consists of hurling 10 of the following blocks (in "dropped form") at the player:

Desktop/Console/Mobile/Switch/tModLoader-Only Content: This section's information applies only to the Desktop, Console, Mobile, Switch, and tModLoader versions of Terraria. 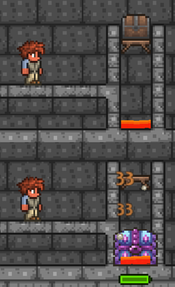 One way to safely kill a manually summoned Biome Mimic.

While disguised, Mimics will not show a usual enemy tooltip when hovering the cursor over them. Below are some tips to help differentiate real chests from Mimics.