Desktop/Console/Old-gen console/Mobile-Only Content: This information applies only to the Desktop, Console, Old-gen console, and Mobile versions of Terraria. 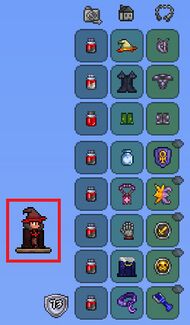 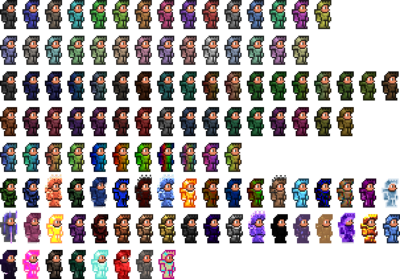 My dear, what you're wearing is much too drab. You absolutely must take a lesson in dyeing your tired attire!

Dyes are items that can be placed in the "Dye Slots" of a player's inventory to alter the colors and/or textures of equipped armor, vanity items, and accessories. The Critter Shampoo allows applying dyes to minions. The Dye Trader NPC sells two dyes (Silver Dye and Brown Dye) as well as the Dye Vat (5). The other dyes must be crafted using the Dye Vat or obtained through trading in Strange Plants to the Dye Trader. Primary crafted dyes can be further combined to craft Bright, Gradient, and Compound dyes. There are currently 119 / 68 different dyes in the game (118 / 67 on single-player worlds, as Team Dye is not available in single-player worlds). Some dyes will make sprites visible in complete darkness, most of which are Strange Dyes.

Dyes are not available on the Nintendo 3DS

version, due to the unavailability of pixel shaders.

All basic dyes are crafted at the Dye Vat. Their crafting ingredients (not including Silver Dye and Brown Dye) can be found growing as background objects in the natural world or are guaranteed drops from special enemies. All dye plants show on the map. None of the Basic Dyes are visible in complete darkness.

All colored basic dyes (except for black) can be combined with Silver Dye to craft Bright Dyes at the Dye Vat. None of the Bright Dyes are visible in complete darkness.

These dyes produce fade effects between multiple colors. They are crafted at the Dye Vat. None of the Gradient Dyes are visible in complete darkness.

These dyes form patterns with multiple colors, applied as separate blocks depending on the shape of the item. All colored basic dyes, and some "flame" gradient dyes, can be combined with Black or Silver Dye to craft "<Color> and Black Dye" or "<Color> and Silver Dye", respectively. They are crafted at the Dye Vat. None of the Compound Dyes are visible in complete darkness.

Desktop/Console/Mobile-Only Content: This information applies only to the Desktop, Console, and Mobile versions of Terraria.
Strange Dyes

These dye are given as quest rewards by the Dye Trader in exchange for Strange Plants. Dyes with a rarity level of Orange or Cyan can only be awarded in a Hardmode world. Strange Dyes have varying degrees of visibility in complete darkness. Note that Strange Plants are only obtainable in Hardmode.

These animated dyes are crafted using Lunar Fragments at the Dye Vat. Solar Dye is the only Lunar Dye with any visibility in complete darkness.

Unobtainable
The item(s) or effects described in this section exist as functional game items, but cannot be acquired through normal gameplay.

Dye Hard • “Equip a dye in every possible dye slot.”
Equip dyes in all dye slots.